Knock on wood, I still don’t have horror stories from business travel. Today was another good day. We were delayed in Toronto for a couple hours due to a wind storm, but that just meant I missed the beers Sunday night. No biggy. I’m sure there will be plenty of that starting Monday.

On the flight from Ottawa to Toronto, I sat a couple of rows behind Joe Clark. Joe Who? (Canadians will get that one). He was a popular politician in Canada during the 80’s and 90’s. He’s retired now and was traveling alone. He followed us through US customs so I guess he was traveling to the states to give a talk or something. Oh, by the way, he’s a former prime minister of Canada and later the foreign minister. Only in Canada would we figure it isn’t a big deal to let a former leader of our country travel around without security.

Then on the flight from Toronto to San Fran, we had an more important person on our flight, Mike Milinkovich himself. (Of course, Mike being Canadian would be the first to say he doesn’t deserve such accolades). But he did get the royal treatment, much more than poor Joe Clark did our our little regional jet to Toronto. Mike got through the airport quickly and by the time we got to our car, he was long gone. 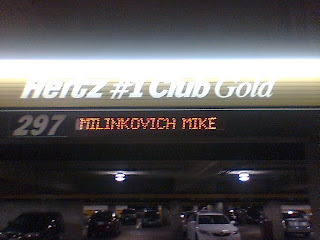 Anyway, I’m happy to be here and it’s going to be a fun week. I already met some CDT people who were sitting in the bar when we got into the hotel. I hope a lot of the CDT community is here so I can meet them all and find out how they’re doing. If you are here, feel free to stop me and say hi!