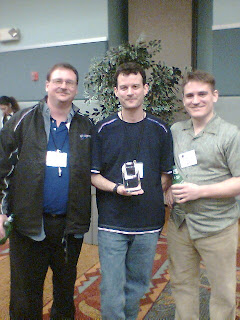 That’s me on the left with Dave Inglis, the team lead for our Momentics IDE holding our award for best commercial Eclipse-based development tool, and Fred Plante, our fearless leader and manager of the QNX Tools team.

On our way home from EclipseCon, we stopped off to visited a good customer of ours. They like what we’ve done with Eclipse and had some good constructive criticism on areas where we could improve. They love the tools that are our value add with Momentics, but they confirmed what I always thought, that those tools don’t matter much if the edit, build, debug cycle doesn’t work as well as it can, or worse, hurts productivity.

But it really hit home coming the day after EclipseCon. It really showed how important our work on the CDT is to our customers. And judging from the passion of the people we work with on the CDT, this is true for all vendors that ship the CDT. I was very pleased that a lot our our customer’s concerns have been addressed 3.1.2 and will be addressed in 4.0. I think we’ll all have happy customers as CDT 4.0 hits the streets.

I also have one final thing to say about EclipseCon. Someone commented to me that they felt that there wasn’t much buzz this year. Others though felt otherwise. What I think happened was that we saw much less marketing push from vendors and much more excitement from the engineers that were there. That’s a different type of buzz and from an open source project perspective, much more important. Eclipse is driven by those who contribute to it and as someone else said, this truly was a “Community Party”, and in my view, that’s what will give Eclipse the biggest boost.