And so it began. Five years ago yesterday, the new CDT project was born. The QNX team had just gone through six months or so of compressed development in a remote location affectionately called the “Toolshed” (we’re known as the Tools team). They had basically gone from nothing other than the source to Eclipse and JDT to come up with a fully functional C/C++ IDE. But QNX is an RTOS and run-time company. Tools enable that business but take a huge investment to do really well, and it was becoming clear that a lot of good can come if we would share the work and benefits of that work with others in the open. A handful of other vendors liked what QNX had done and worked together on starting this new direction for the CDT.

A meeting was held at QNX headquarters on July 17’th of that year in what turned out to be the first ever CDT Summit. In attendance were people from QNX, Rational, Red Hat, and MontaVista. From day one, we enjoyed the spirit of “co-opetition”, co-operating competators, that still lives strong today. Here’s a fuzzy picture of Sebastien Marineau from QNX on the right, the first CDT project lead, who really got this whole thing off the ground. He’s sitting with John Prokopenko, a senior architect/manager from Rational and a mentor of mine. 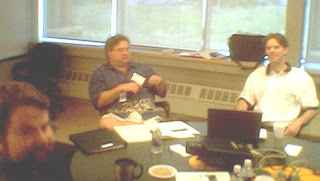 I was at Rational at the time and this was my first exposure to the new CDT. And as we know now, it became a career changing moment for me. Who knew then that I’d spend the next five years living out a dream of mine, to make a software development tool that would help thousands of software developers write better code faster. I wouldn’t have passed that up for anything. 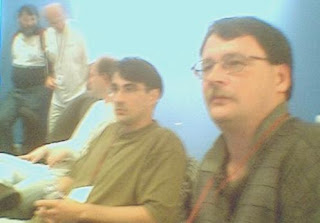 There are many people to thank for getting us here, including Sebastien and the team here at QNX for having the vision to share their great work with the world. To my former co-workers at Rational/IBM (who coincidentally I had lunch with today) for helping get this crazy DOM thing in place. To the gang at Intel (especially Leo!), TimeSys, Chris at TI now at IBM, and everyone else who formed that initial spurt of a community outside the original two, to all the product vendors and users and contributors that now form what I estimate to be our 400,000 member CDT community.

Thank you all! And happy 5th anniversary!