OK, I’m getting old. I’m still in my late 40’s but I remember a time that a lot of people younger don’t. I was in university in the late 80’s and our favorite compute platform was the legendary Sun 3 workstations. They were cool. They had a big graphical display with an optical mouse and a pretty fancy keyboard. They had a lot of power, relatively, had a great OS in SunOS, a BSD Unix derivative. It was a great machine to build software with. 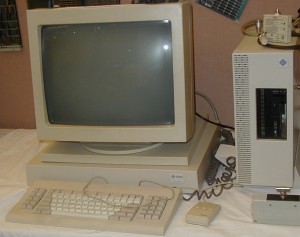 Our love for these machines and similar ones from HP went on well into the 90’s when commodity personal computer’s based on Microsoft Windows NT and Intel CPUs finally became as powerful and feature rich as the workstations of old. And we were OK with that. We were getting pretty tired of spending up to $10,000 on each one of these when you can get an equivalent PC for $2000. Yeah, you had to put up with Windows but they got the job done and had way more productivity apps than our workstations did.

Then something really weird and wrong happened. Consumers decided that they wanted these machines for themselves to run their little browsers and word processors on and to play games with. Popularity exploded and these machines became even more powerful. And we software developers benefited from that. The workstation days were a distant memories and we used to laugh at how little power they really had.

But, yeah, it was wrong. These machines were never meant for consumers. They were business machines and had the UX to match. Why was my Mom learning how to use a mouse and navigate through a complex operating system just to browse here crochet patterns on the Web? Well, the inevitable happened. The computer companies were finally handed their lunch as mobile devices and their simpler consumer friendly UX became hugely popular. “Wait, everyone wants tablets and smartphones. The desktop is dead!”

Well, you guys can have it. One thing that hasn’t changed is the demand for good machines to build software with. While the Desktop follows the consumer into simple-land, and rightly so I guess, an opportunity has opened again for the return of the Workstation. I think Apple has caught on. The new Mac Pro is back at the $10,000 price point and offers incredible power and, again, a great Unix-based OS in Mac OS X. I think there’s a need for similar machines built for Linux although Linux needs a user interface that has evolved at least a little bit from what we had in the late 80’s. But with Wayland and Qt like you see with the Hawaii desktop from the Maui Project, I think that’s getting with in reach.

“But hey Doug, what about software development in the Cloud?” You mean like we did on IBM mainframes and shared Unix minicomputers until the early 90’s? Well, as I fight with the slowness and scalability issues with defect tracking and code review tools shared with hundreds of other developers, I remember clearly why that wasn’t good enough before. We wanted computers on our desks so we didn’t have to be impacted by what others were doing in these shared environments. And you know, check out the CPU specs on that server you’re using out there, it’s probably less than what you have on your lap reading this. So we can replay history if you want, but I’ll take a pass on this cycle.

So, yeah, the Desktop is dead, and probably shouldn’t have ever happened. But I don’t expect this Workstation I’m using, my MacBook Pro, to be going anywhere.